Out with the old, in with the new

I have a dilemma.

I’ll back up a bit. I was at Barnes & Noble the other day, and their 2014 planners were 50% off. I picked up a cute polka-dotted one, but then I stood there thinking, “When was the last time I even used my planner?”

I just pulled it out of my purse. It’s open to the week of October 28.

I love scheduling things and all, but scheduling is so much more straight-forward when you do the same things week after week. My planner was extremely useful when I was juggling three part-time jobs and making sure that I could get to all three of them, and also trying to coordinate seeing shows around the Bay Area. Now that I just go to the one job, and I don’t go out anymore, it’s a lot easier to keep straight in my head where I’m supposed to be. (Answer: work. If not work, then go home.)

Also, Drew and I had a wall calendar this year, which we actually used. And that makes more sense, since it’s accessible to both of us.

I guess my purse planner has been replaced by a combination of kitchen wall calendar and iPhone calendar…which I hate to admit, but there it is. The thing is, I can put appointments into my phone, and they’ll show up on my work calendar as well! Which is very helpful.

So, I guess I don’t have a dilemma, so much as I have a sad fact to face: 2014 is gonna be the first year in many years that I don’t bother buying a planner for myself.

Even though it was $4 at Barnes & Noble, and very cute. Did I mention it was covered in polka dots?

Happy New Year! Let’s raise a glass to 2014 and to moving on, however (un)willingly we do so.

I spend a lot of time lamenting choices I’ve made: for example, I got in the wrong lane at Target, with the high-maintenance customer at the front of the line. Or, I bought lunch today even though I told myself ten times this morning not to do that. Usually, I took one freeway home when I should have taken the other. Etc.

But sometimes, I do something, and when the dust settles I just feel like I have to throw myself a parade because I MADE THE RIGHT CHOICE.

This is one such thing: 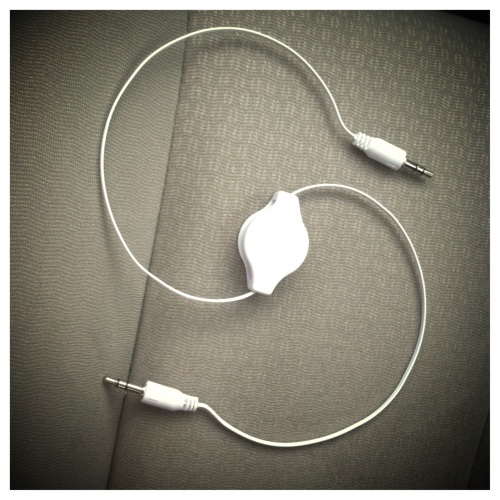 This is an aux cable, which I can use to play music (or audiobooks!) from my iPod or iPhone in the car. Drew and I went to Best Buy like a month ago to buy one, and it was a hassle to park and then to get the stroller inside, so when the only aux cable they had on the shelf was $22, I bought it because I didn’t want our trip to have been in vain.

But when I got home and checked Amazon, they had this baby for $1.57 with free (albeit super slow) shipping. I was like, Sorry Best Buy, and promptly ordered this one, and returned the Best Buy one later that week.

So yeah, this cable took awhile (like 3 weeks) to show up. But it’s perfect, and the cord retracts into the center piece until you pull it out, so it’s not flopping all over the place. I love it. So happy. I MADE THE RIGHT CHOICE.

An ode to Apple

At some point I got into my head that I did not want to download the new operating system for my phone. So I just never did. But things started slowly dropping off the map: certain apps wouldn’t let me update them because I didn’t have the new iOS, then there were new apps I couldn’t even download, then I couldn’t even use some of the apps I had. Ridiculous.

So I tried to download the new iOS…and for some reason I couldn’t complete it. I downloaded the new iTunes, I downloaded the new iOS, but my computer consistently got stuck on backing up my phone. I left it plugged in for hours, and no dice. One night I left it plugged in overnight, hoping that when I woke up magic would’ve happened…but apparently when my laptop went to sleep, it shut down the backup. Disappointing.

I knew I needed to just go to the Apple store. But who has time to do that?

Well, finally, one day a couple weeks ago I magically found time to do just that in the middle of the afternoon. I dropped by the Apple store at the Hillsdale Mall and was told that all I needed to do was to make an appointment at the Genius Bar. Which I did. I went back a couple days later, at my appointed time, and spoke to Johnny. He was a delightful and helpful Genius with an assortment of tattoos, including the Apple logo.

I was prepared for the fact that they might have to wipe entire phone to update the iOS, so I had backed up everything the night before. It was still nerve-wracking: I sat there and watched the status bar progress, just hoping that everything would go okay.

A 30-something in a suit sat down next to me and told Johnny about how his phone had stopped charging and he needed to buy another one. Then I felt grateful that I didn’t have to buy another phone. (Then my thoughts started spiraling out of control, and I found myself at the point of “I’m glad I’m just losing my contacts and not my family,” etc etc.)

When I got home that night, I plugged my phone into my laptop to sync everything back up, and EVERYTHING – contacts, apps, photos, texts – repopulated in the phone. A complete success. And all thanks to Apple! Great products and awesome customer service!

(I did end up deleting all photos and videos anyway, because they were taking up all the available space. After I did that, I could update all apps and even download new ones, and start taking more pictures! Life is good.)