In honor of my new routine of taking BART to work, I’m throwing back to an NYC subway post from my LiveJournal. This post hails from Feb 23, 2009.

I just need to marry someone who has good vision coverage…

This morning on the train a manly man got on and stood next to me. While glancing over his shoulder (bored) I noticed he was reading a paperback copy of In Her Shoes. This delighted me secretly and I admired him for his casual reading of chick lit on a crowded New York subway. Glancing over again, I saw one of the chapter headings: “A Harder Task Than Making Bricks Without Straw.” Hmm, that doesn’t really sound like Jennifer Weiner. I squinted closer at the book title in italics on the top of the left-hand page. Up From Slavery. (It’s the autobiography of Booker T Washington. I looked it up on Amazon.)

Last weekend Drew and B and I went to Half Moon Bay for breakfast and pumpkin patch-ing, with Erin and Scotty’s family. We met up at Blue Sky Farms, which is a nursery/cafe run by the family of a friend. Then we headed south to one of the many pumpkin patches found on either side of the highway.

Drew and I forgot to take the Ergo carrier for B, and we didn’t want to try to push a stroller around a pumpkin field, so we ended up carrying him the whole time. Which is fine, since he’s still relatively light, and since he’s so cute other people want to hold him too, so you can usually pass him off to someone for a short period of time. (Just kidding. Sort of.) B slept through the entire thing.

We’ve been doing all kinds of things with him, but he sleeps through them all – we keep saying that our “holiday/first few months” photo book is just going to be him sleeping in different fun situations and activities. (Not that I’m complaining that he’s a good sleeper.)

Scotty is over a year and a half old, and he’s very smiley and talkative, and likes to run around and is learning colors. I’m looking forward to when B is older and can have more fun when we take him places. In the meantime though, he sure takes some cute (sleeping) pictures. 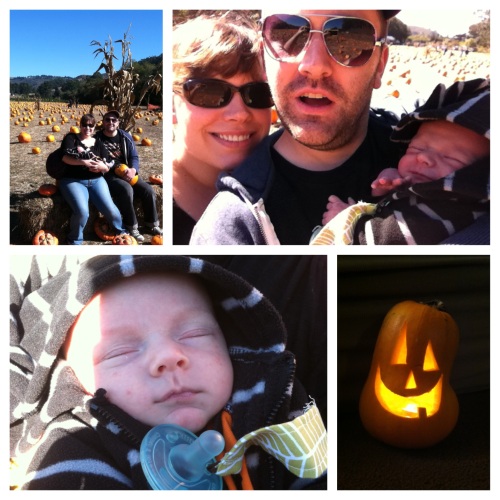 On Halloween, I took B to work for my office Halloween party, where he behaved very well and got passed around some more. After the party, my friend Katie and I took her two kids and my one kid over to her husband’s office, which is much larger and not a nonprofit, so they were hosting this huge trick-or-treating and Halloween party for all the employees’ families. So B got to show off his costume (he was dressed as a little cow), show off his manners, and go trick or treating for his first Halloween.

That night, Drew and I carved our pumpkins, and took him to Drew’s parents’ house to trick or treat there as well. (Guess who slept through it?)

So although some of it was kind of last minute, we did get it together and do all the traditional Halloween activities. (Next year, though, I’d love to go to a corn maze.) (I say that every year.) And now we are really onto the downhill slope into the holidays!