For this post, I have officially introduced a new category: sports. (I predict this will be the smallest category in the category cloud.)

Also, pretend I posted this yesterday on May 11th.

On Tuesday Drew and I and 5 other friends went to see the SF Giants play the Arizona Diamondbacks. We got the tickets mainly to support one of the teacher friend’s all-girls science club – of the ticket price, something like half of it went to the club. The teacher friend said she’s going to use the money to buy consumables: meaning containers that need to be replaced, things like vinegar and baking soda, food coloring, etc. A good cause.

We set out early to get to AT&T park, because we were going during rush hour, and the freeways can get crazy. Like, really crazy. Seriously. I’ve seen it. So four of us left around 5:00, to give us enough time for traffic, parking, and then walking up to the park. We intended to meet up with everyone at 6:30 by the Willie Mays statue.

This is what we were trying to do:

It’s also basically what we ended up doing. We found ourselves standing outside AT&T Park at about 5:30. Luckily the other friends are equally as conscious of traffic, and so we were all there at relatively the same time.

We stood outside for awhile, admiring the commentors doing their thing, and the line for the bobbleheads (?). 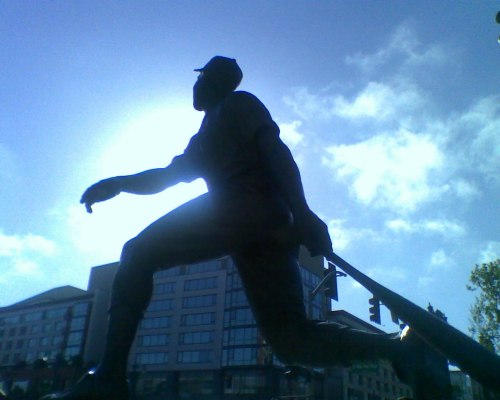 It was a very nice day, albeit windy. I was wearing my Wicked sweatshirt, as it’s the softest and warmest thing I own, even if it’s slightly embarrassing.

Here’s Willie Mays from another angle.

When we went into the park, we found that we had the BEST SEATS IN THE PARK. Because we were so far up. The higher up your seats are, the better they are, right? Because you can see everything without having to turn your head, plus they bring hot chocolate and churros right up to you.

You also get the best view of the fog rolling in, as it’s wont to do.

Soon the pharmacist friend wanted to go get a crab sandwich. Legend has it Tyler Florence himself comes to AT&T Park and makes them. So we went off in search of crab sandwiches. We found the booth, and Tyler Florence. We also found a place where I could get a Sprite for $5.25…the best kind of Sprite. We were somewhere behind the giant screen.

At the sounds of the National Anthem being played, we headed back to our seats. This is when I discovered that the giant Coke bottle is a slide! Before then, I believed that was just one of the things my dad said to be funny. Imagine my shock and awe when I saw that it’s not only one slide, it’s SEVERAL slides, and children were all up in it. Pharmacist friend asked if I wanted to go down the slide, and I did, but unfortunately I’m nearly 27 years old.

My dad also says that there are places in the park wall where you can watch the game from outside, without having to buy a ticket. Here is proof of that.

Well, the game went on. Aside from the crab sandwich, among us we also consumed many Vietnamese sandwiches (banh mi, smuggled in from outside), something like 5 hot chocolates, my Sprite, parmesan and herb Sun-chips and jalapeno Cheetos (also from outside). I guess that’s all. One thing I learned is, I will bring my own snacks next time.

And the game went on. Eight and a half innings with the score still tied zero to zero. Around the sixth inning I started thinking I would rather lose the game after such a fight, than have to go into extra innings. But you have to understand, it was cold, and getting later, and it was only Tuesday night. Early in the week.

In the bottom of the ninth, everything came up roses when Cody Ross RBI’ed Darren Ford, and the game was over! Thank God! Plus, we won, and Colorado lost, and I think that means we might be number one now? Not sure, because I’m kind of a part-time baseball fan. Someone will correct me, surely.

So then we began the night exodus out of the stadium and back to the car. 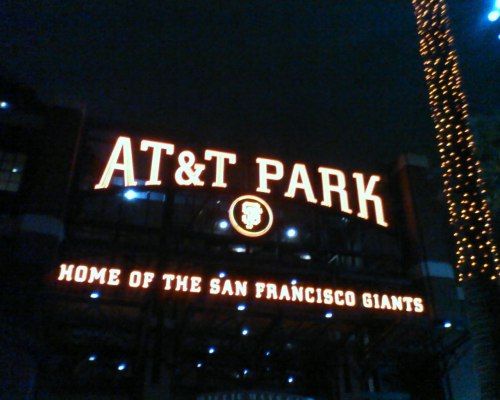 Even though I wouldn’t like to go every game (or even every other game), I still had a great time, and it was even sweeter since we won. Nothing like a sense of totally unearned smugness.

Filed under Being a girl, Friends, Nature, Self improvement, Sports